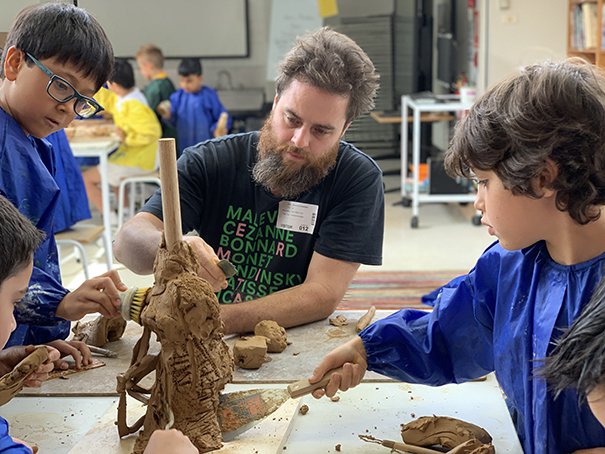 Drinkwater spoke patiently and respectfully to each class about his philosophy and his work, sharing and describing the ideas behind some of his paintings, sculptures and assemblages. The boys were particularly interested in the street assemblages that Drinkwater made with found objects whilst living in Berlin.

Drinkwater showed the boys the tall, thin sculptural works of Alberto Giacometti, and then put them in small groups to make terracotta sculptures representing the human figure. Working in house groups, boys constructed their pieces by applying and working clay on wooden armatures. This was an unusual project in that each piece was truly a pupil/artist collaboration, with hands-on work by several boys, as well as Drinkwater.

The 52 sculptures (4 per class) are now in Drinkwater’s studio in Newcastle, where he is sealing and finishing them. This work is in preparation for an art exhibition, originally scheduled for Term 2 at Nanda\Hobbs Gallery in Chippendale. We are now planning a virtual exhibition from Drinkwater’s studio.

“This was an unusual project in that each piece was truly a pupil/artist collaboration.”

Drinkwater is thrilled with the boys’ interest in his work, as well as the initiative they have taken in making their own works at home. Of Rory McGillivray’s study of The Boy, made at home using recycled materials, Drinkwater said, “That’s incredible! Rory’s work reminds me of an exhibition of cardboard works by Jake and Dinos Chapman that I saw in Berlin.” And of Elias Malik’s drawing, he said, “What a beautiful interpretation and what bold use of colour!