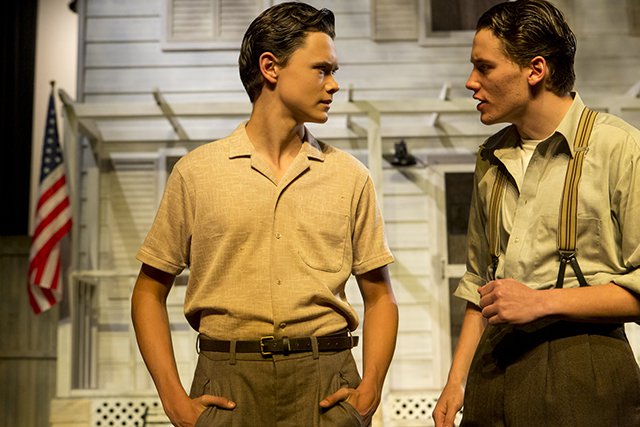 As I first learnt from working on Death of a Salesman in 2005, the great challenge with Arthur Miller’s plays is to find a balance between subtlety and intensity – or more precisely, to develop sufficient subtlety to make any emotional intensity seem credible and real. I was blessed, back then, to have a brilliant cast at my disposal, and, somehow, that blessing turns out to have stretched across the years to 2019.

Set in a kind of quintessential, 1947 America, All My Sons tells the story of a family torn apart by a collision of values – between the cynical pragmatism of a father and the innocent idealism of his son, between the harsh reality of American greed and the more appealing notion of America as a paragon of social success. This collision begins as the cracking of a happy, suburban veneer, then accelerates through various revelations to a final, cathartic collapse. Binding this engrossing story together was Max Danta (VI), whose stage presence and gravitas created a convincing Joe Keller, at once affable and overbearing. As his grief-stricken wife, Kate, Daisy Semmler magically interwove the rawness and chaos of bereavement with a mother’s unrelenting determination to shield and support her family. Oscar Seifried (V) deftly crafted the surviving son, Chris, as both boyishly optimistic and affectingly distraught with disappointment, while Anika Deva, as his love interest, Ann Deever, brought a moving grace and dignity to her role as both participant and witness. In support of this core group, Felix Parker (VI), as Ann’s brother, George, showed us a stumbling desire for justice undermined by a disarming desire for acceptance, and Douglas Cooney (V), as neighbour and friend, Jim Bayliss, offered both wisdom and touching empathy. Providing much-needed comic relief, Katarina Kuo was wonderfully sour and sassy as Jim’s wife, Sue; Max Philips (IV) brought sweetness and sincerity to the otherwise simple-minded Frank; and, as Frank’s wife, Lydia, Olivia Doyle shifted with amusing suddenness between sunny flirtatiousness and bored irritability. Last but by no means least, Mark Bergman (I) was convincingly exuberant and vulnerable as eight-year-old Bert. Once again, the technical crew holding the show together was led by the ever-calm, ever-precise Corey Blyth (VI).

All My Sons ends in a moment of tragedy – a single instant that, at each performance, managed to shock the audience even when its inevitability seemed obvious. The power of this moment depended directly on the tension that these fine actors had been building on the stage – slowly and carefully - in every relationship, every exchange, every gesture, every glance and every line. The fact that all those watching were so captivated by this intense and moving drama speaks to Arthur Miller’s theatrical genius, but also to the extraordinary talent and dedication of a truly wonderful cast. I can think of no better testament to their achievement than to remember that, each night, looking around the theatre, I realised that every member of the audience had totally stopped moving; and it was as if, in being so utterly spellbound, they’d forgotten the need to breathe.